My Journey Working at Project Samuel by: Humphrey Munjeya

My name is Humphrey Munjeya. I started working here at Project Samuel Zambia as piece work in 2013 (in Zambia it is called “piece work” when you are hired to do a specific job). We were two of us who were doing the piece work. They told us to dig the holes to put the poles for fencing. We did that work until we finished it. And then they give us another work to go and cut the poles for the fence, and we also did that work. There were 250 poles for the fence. By that time when we were doing fencing it was August 2013. And again, they give us another piece work to do stumping and they add one more guy, and we become three doing the stumping. We agreed to do that piece work for a daily pay.

After some days one guy stopped coming and we become two again in stumping. And some more days and the other guy I was with also left me and I continue and continue pushing the work alone, until I reach where they told me to reach. And they told me to pile the stumps and burn them. By that time my manager became happy with the way I was doing the work, and told Brenden that, “That guy (me) is very hard working. He can join us working here at Project Samuel Zambia!” This is how I started working here at Project Samuel. And I was working in poultry – it was 2014. I worked in poultry for three years and I learnt a lot of things which I didn’t know in poultry and also around the Project Samuel as a whole.

On 8th April, 2014, my wife give birth and Project Samuel help me with the transport to and from the clinic. Unfortunately, the baby died the same day, and when I told Brenden that the baby die, he help me with a bag of maize and some cooking oil. 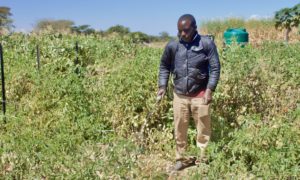 On 1st May, 2014, I sign a first contract! In 2017 I started work in the garden. I am not doing the best, but am trying to do better in the garden and am looking forward to learn more jobs in construction like painting, making ceiling boards and so on. I have worked at Project Samuel now it is seven years.