In The Midnight Hour

Looking at my phone, I notice it’s a little after two in the morning. Getting up, I stumble to the door where Rebecca informs me that someone is outside. It’s completely dark and I can barely make out the mans face, but I ask him what’s going on. The man proceeds to tell me about his father that needs transportation to the clinic nearby. Not fully understanding what’s going on, I decide to wake up Paul, one of the workers, so that he could help me figure out the situation. Paul tells me that the mans father has been getting worse for days, but tonight he is unable to walk, unable to think and communicate clearly, his chest is hurting, and there are open sores growing on his body. Finally I decide: “Okay, let’s go get his father and take him to the clinic.” 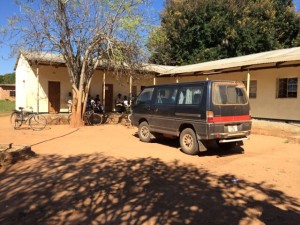 Using the minibus we make our way cautiously down the dark, dirt road to the village of the man’s family. The man goes into the hut and comes out moments later with his father in his arms. A wave of compassion hits me as I see this man loaded into the back of the minibus, then we’re off to the clinic with him and his family. So many thoughts are racing through my head, like: “Should I pray for this man? What if he doesn’t get healed?” As we arrive at the clinic, the man’s two sisters ran to go wake up the director of the clinic to help their father. The director comes and opens the treatment room, while we wait outside for almost an hour. Eventually we are released with the man’s father and several medications that will hopefully make him better. Driving back to their village, I am thinking about what could’ve happened had I been stubborn and said no to getting out at two in the morning.

Parked outside their hut, the man carries his father back inside with Paul’s help and Paul returns to me outside. I had made my decision. “Paul?” I asked, “Would the family be okay with us praying for him?” Paul replies: “Sure.” So the family tells us we can come into the hut and I ask to lay hands on the father. All gathered around him, we pray together for healing, for peace, for God’s compassion to be revealed to this family during this tough time. Tears coming to my eyes as I’m praying, I feel the love of God for these people. 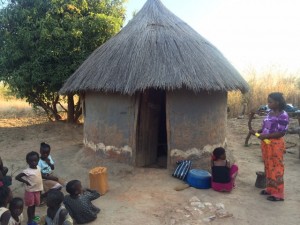 So after praying, they thanked Paul and I as we started off to make our way back to the project. Two hours of sleep are gone that I’ll never get back, but I’ve gained something much greater than sleep, far more important than myself. You may read this and think that this is all about me and my experience. But this isn’t about me at all, it’s about God’s mandate to be a light to the world, to bring hope to the hopeless, to show His love and compassion to every person that crosses our path. I don’t want to be the person that just expresses love in word, but in deed also. It’s important that we seize every opportunity that God gives us to minister to people no matter what kind of ministry we find ourselves a part of. God doesn’t just work in our time, He works all the time. Fear and selfishness could have ruined this opportunity to minister not only by helping a family in need, but it could have kept me from praying for the man’s father.

This isn’t a story about miraculous healing, though God is the Healer. Rather this story is about opportunity, relationship, compassion, hope, and love. I don’t pretend to know God’s ways which are far higher than my understanding, but I understand one thing. 1 Corinthians 13:7 says: “Love bears all things, believes all things, hopes all things, endures all things.” If nothing else comes out of those two hours in the middle of the night, that family knows that God cares and that we care. They have seen faith, they have received hope, and they know love!